In Language with Pilar we’ve been working on Ghost Stories. Now it was our time to write one. The objective was to cause fear and transmit tension, but also we had to include sounds to the story. This is mine.

In Biology we are studying the Respiratory System. Today we learnt about the gas exchange and we made a chart about it.

In Language we were asked to write a description of a remote area, where temperatures are extreme, and very few people live. I chose the village of Salinas de Bustos, in La Rioja. And this is my description.

Located on the south of La Rioja province, Salinas de Bustos is a small town that embodies a small amount of people. This place is full of humble but goodhearted people, babies, children, adults and old people.

Many activities can be done there, from football or running, to weaving or going to school. As it is a small poor town, there is only one school for everyone. Everyday children go there filled with joy, anxious to learn something new. Screams and the stepping feet on the field as they run can be heard from long distances. Around the school, the homes of all the neighbours are situated very close to each other. Walking around the houses and its patios, a lot of fences trap pigs, sheeps, lambs, chickens which then are used to feed the families. The stinky smell overruns the atmosphere.
The weather there is very extreme. In summer,  it is almost impossible to go out do to the scorching heat that overwhelms you. In winter, however, temperatures reach the 0° so you can see the field filled with fires that keep people’s body temperatures despite the freeze.

Recently, Chile’s earthquake hit this area so it’s now a bit devastated. However, the residents are doing the best to reconstruct the damaged houses.

Despite Salinas de Bustos not being the richest area or having many resources, it is outstanding for it’s people and their sacrifice.

For this 3rd term in Language with Pilar Pando we had to prepare another BookTube. The book I chose to prepare this oral is “The Bluest eye”, by Toni Morrison. This is my review of the story.

These are some key writing techniques necessary when writing an essay.

In Biology we started with the new topic: Respiration. Thus we were asked to do some activities on this topic. These is the task on Male’s blog. I worked with Flor and Bauti. 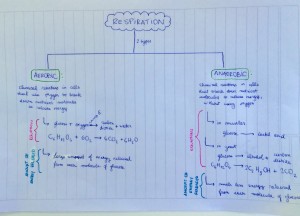 3. Anaerobic respiration produces an oxygen debt. This is the amount of oxygen needed to oxidise lactic acid to carbon dioxide and water. The existence of an oxygen debt explains why we continue to breathe deeply and quickly for a while after exercise.

4. This is a video that explains why breathing rate doesn’t slow down immediately after exercising.

In the minute 1:36 he begins to explain why and in the minute 1:50 he explicitly says that air also goes to muscles to help them recover afterwards.