In Language and Literature with Pato we had been reading some articles related to natural disasters and make a list of useful words and phrases used to describe them.

After this, with my partner Mara, we had to write a description of one devastated place based on a picture using as much as phrases from the vocabulary as we could. This is our description. 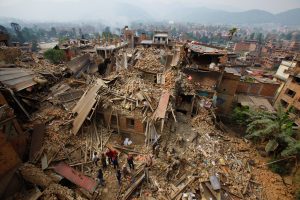 Lamphun was an alluring, picturesque and secluded village 3 months ago, before the devastating and violent earthquake demolished and depopulated the  area. I say was and not is, because such was the destruction that we cannot consider the place a “village” anymore.Lots of people were affected, many were reported missing, and also, a huge amount of buildings did not make it.

The tremor hit at south Lamphun, and was quickly followed by four aftershocks. The quake struck at 8:17pm yesterday and had a magnitude of 8.3. A tremendous amount of noise, shouting, and screaming was heard from the different alleys of the village. Asthe infrastructure collapsed, villagers were seen crying, while many others desperately tried to ferry the injured to the hospital. Bodies with white dust could be seen piled up, and the unharmed were trying to dig victims out with flashlights. Immediately after the earthquake, the remaining villagers were left without electricity, the village was in complete darkness.

People living in the area were desperate, chaos flooded the place. Rooftops ended up on the floor and the grass  could not be seen due to the debris that covered all the ground.

As regards the people’s livings, the ones who have had the luck to survive, have been left homeless, their whole house where they have always lived has suddenly vanished, they now have nothing to eat, neither clothes to wear and their whole furniture has been destroyed.

Men have described the catastrophe to the media: being walking in the streets when suddenly the ground began to shake and the flats started coming down over them provoking great bangs and explosion-like sounds. Tales of horror have been depicted by the survivors who many were  in their offices and had to evacuate abruptly interrupting their daily ordinary activities.

This catastrophe had many repercussions. There is still not official word on the casualties, people are still very much shocked, looking desperately for their loved ones. Search-and-rescue operations are underway for the missing and emergency services arrived moments after earthquake strikes. Nonetheless, the village still needs money because of the magnitude of the damage caused. Word has now spread, and many nations from around the globe are gearing up to send aid to help the people from Lamphun. India  is an example of this as it  has offered a $100000 grant emergency aid for the rebuilding of  the crumbled constructions and for the rebuilding also of the victim’s lives.