We´ve been working in a history project with Senior 3. Here you can see more details about it. I worked with Jose Zubizarreta and our topic was the Rhineland.

In march 1936, Hitler remilitarized the Rhineland area of Germany. By doing this, Hitler was taking a huge risk, he could have been asked to withdraw, and if so, he would have been humiliated and would have lost the support of the German army. Anyway, Hitler had chosen the right time and place.

Since France had signed a treaty with the USSR to protect each other from German attacks, Germany used this as an excuse to say that he felt threatened, and so he would rearm his frontier.

Moreover, Hitler knew that Britain felt that he had the right to starion his troops in the Rhineland, so they wouldnt intervene.

German troops had orders to pull out if Germans acted against them, although they knew that their army was no match to France’s, since they lacked essential equipment.

The League of Nations didn’t have the power to do anything more that to condemn Hitler’s actions. Althought the French felt threatened by the remilitarization, they refused to actout without the British support, Hitler  got away with his was the first  term of the treaty of Versailles that Hitler broke in order to regain power. 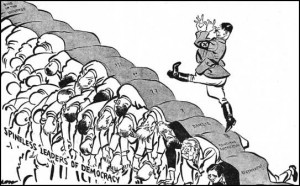 This source shows how  Hitler gained power by walking though  and breaking the democrat´s rules. Little by little he got more powerful. It is a secondary source. 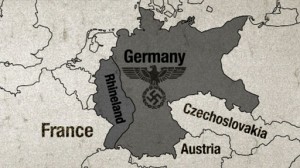 This source is a replica of where the Rhineland was situated, which was between Germany and France.

This is a British cartoon that represents Hitler stragedy, how he gained his power step to step.These are the goose steps. The goose in the comic is armed, which represents Hitlers aggression. 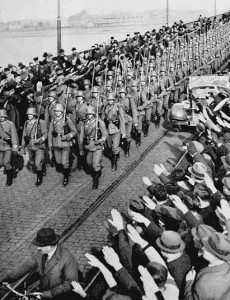 This is a primary source, showing the German troops  marching through the crowd towards the Rhineland, being saluted.

The objective of this source is to show that «Hitler´s Party» or Germany was «escaping» from the Treaty of Versailles because they were breaking the term of the Treaty which established that the Rhineland should be demilitarized.

This is an interview I made with Catu Grosso in which we interview Hitler about the Rhineland: why did he did what he did, how did he feel, if he was prepared or not. For this work, we had to use some quotes from the written sources that are above, to answer some of the questions.